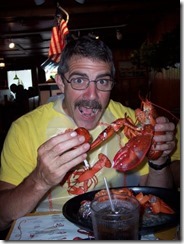 There was once a man who loved lobster so much he couldn’t stop eating it. He was surrounded by stinking lobster carcasses because he couldn’t take the time away from eating to clean them up. They stunk to high heavens. No one wanted to be near him and his lobster carcasses. Every time he started to smell them, he’d just have another lobster and the transcendent pleasure he felt when he ate it took him away from the squalor that surrounded him. He loved lobster, at the same time that he was starting to hate the stinking mess that lobster made of his life.

The man who loved lobster was a lot like drug addicts and alcoholics I’ve known. When they wake up in the morning, they’re surrounded by the debris of their addiction. There’s the broken window they never fixed. The bottles tipped over. The sour, spilled beer in the carpet. The ash tray filled with butts. The bed sheets unchanged in months. The companion in bed that they never saw before and wish they’d never see again. The injured friends. The ill-treated family. The angry boss. The frustrated judge. They see all that when they wake up, so they have another hit. It carries them away from all that, so they don’t have to think about, or acknowledge the mess it’s making of their lives.

The man who loved lobster thought he was the one who stunk, but it wasn’t him; it was the stinking lobster carcasses.

Don’t get me wrong, lobster is good. I love lobster; but the carcasses must be properly disposed of, or they will stink.

What the man who loved lobster needed to do was simple. He needed to stop eating lobster long enough to clean up what he had already eaten. Then, provided he’ll clean things up as he goes along, he might be able to start eating lobster once more. Well, maybe not. Considering the cost and trouble, he would be mad to ever be willing to risk it again.