Bringing you the best of mental health every week.

Most movie reviewers try to be the first to give you their take on up and coming movies. Not here at the Shrinks Links. Here we include those old classics that you might not have seen before, but are worth seeing now.

One of these is Ways of Seeing, a four part documentary by art critic John Berger and put out in 1972 by the BBC. The series reveals hidden ideologies embedded in visual images and criticizes traditional Western cultural aesthetics.

Good mental health requires that we question tenets that go unquestioned and challenge all the ways we are manipulated.

In the first part, Berger shows that, through the means of reproduction, art becomes free of its moorings and can be used for alien purposes. A copy of an icon of Christ Pantocrator, for instance, loosened from the churchy context of the original and not used in worship, as it was intended, can be enlisted to win votes, perhaps, or to sell cars.

Here is a copy of the image, taken out of context.

In contrast, he talks about the experience of viewing art without the words used to manipulate it.

The most important thing about paintings, themselves, is that their images are silent, still… Occasionally, this uninterrupted silence and the stillness of a painting can me very striking… It’s as if the painting, absolutely still, soundless. It becomes a corridor, connecting the moment it represents with the moment in which you are looking at it; and something travels down that corridor, at greater than the speed of light, throwing into question the way of measuring time itself.

In the second part, Berger examines the history of the Western female nude. Few of the old masters ever depicted a woman as a person in her own right rather than as a subject of male idealization and desire. These paintings school us in how to look and how to be looked at. 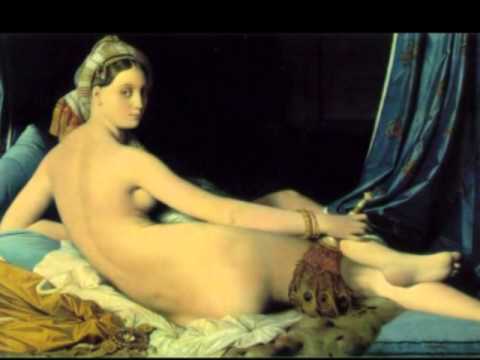 Women constantly meet glances that work like mirrors. Reminding them of how they look or should look. Behind every glance is a judgment… A woman is always accompanied, except when she is alone, perhaps even then, by her own image of herself.

Part three talks about how the easel painting was co-opted to promote a program of conspicuous consumption, with exceptions. One painting, by Vermeer, is an exception.

There is a painting of a woman by Vermeer which, at first sight, confirms everything I’ve said… She’s weighing gold on a pair of scales. Perhaps also, weighing the pearls strewn on the table. Her interest is commercial. In the way the scene is painted, the substantiality and tangibility of everything is emphasized. Everything suggests the solidity of a Dutch middle-class home, even the painting the Last Judgment on the wall behind her. A painting on the wall is a mark of prosperity. As you look, gradually, the painting becomes more mysterious, less easily explainable in my terms. The light falls on her face, on her fingers, on the scales, on the pearls. The moment has been preserved. As we realize that the way it is being preserved, we realize, like every moment it was unrepeatable. It is as though she’s holding the moment between her forefinger and her thumb; on the scales between the past and the future. Despite it’s apparent celebration of property, this painting is about the mystery of light and of time as we look up at the stars.

Part three argues that the role oil paintings once played has been taken over by advertising, or, as he calls it, publicity.

Publicity both promises and threatens. It suggests that you are inadequate as you are, but it consoles you with the promise of a dream.

Alas, for many, the dream constructed by advertising becomes a nightmare when we awaken to reality.